Return of the Showcase of Bands 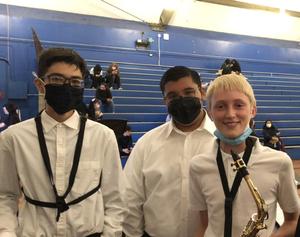 South San Francisco Unified School District’s (SSFUSD) 33rd annual Showcase of Bands has returned for the first time since 2019.
South San Francisco Unified School District’s (SSFUSD) 33rd annual Showcase of Bands has returned for the first time since 2019.
The event features the combined talents of the band programs of El Camino and South San Francisco High School as well as those of the district’s middle schools: Alta Loma, Parkway Heights, and Westborough.
“I am really excited to have my students play in front of a really big audience,” said Westborough Middle School music teacher Anne Martin. “They haven’t done that in two-and-a-half years, and for some of them they’ve never done it before.”
Alta Loma Middle School music teacher Roberto Figueroa agreed.
He said his students had been missing the human element of music.
“Being able to share what they work on definitely gives the students a lot more motivation that we’ve found they were lacking over the last two years.”
The Showcase of Bands was canceled in 2020 and put on hiatus in 2021 due to the COVID-19 pandemic and its accompanying surges.
As a result, this year’s event has taken on greater meaning.
“It’s just a very big celebration of music,” said Elijah Maes, South San Francisco High School’s (SSFHS) band and choir director. “It’s one big conversation between all the schools through music showing how grateful we are to be back.”
Each of the five bands had a chance to show off their talents by playing an individual piece of music before coming together in a grand finale featuring “Byzantine Dances” by Carol Brittin Chambers.
Individually, the El Camino High School band played “Malagueña" by Cuban composer Ernesto Lecuona, and SSFHS played “Ascentium” by Ed Huckeby.
Parkway Heights Middle School’s selection of “Lost Lady Found” from Percy Grainger’s Lincolnshire Posy suite was driven by music teacher Alberto Lopez-Rivas’s fond memories of his college days.
“That piece is a very, very dear piece to me,” said music teacher Alberto Lopez-Rivas. “It starts very slow and slowly grows and becomes more exciting towards the end.”
Meanwhile, Alta Loma Middle School played “Images of Spain” by Michael Story, while Westborough Middle School took on Robert W. Smith’s “Great Locomotive Chase”.
Despite the good vibes, it was apparent that the district’s music program had not emerged from the pandemic entirely unscathed.
According to Mr. Figueroa, the Alta Loma band had close to 60 members in previous years, and he had had to combine two classes just to create this year’s band of 48 students.
Nevertheless, the prospect of making music together brought many students a sense of euphoria.
“I feel happier,” said Westborough eighth grader Matthew Bernarte. “I feel happier than last year.”
His teacher said she understood.
“I think music, even though it wasn’t great over distance learning last year, it still kept kids interested in school, so they were very, very excited to come back this year and be able to play in a big group,” said Ms. Martin.